Growing up, I was always the shortest person in my class. I was guaranteed to lose games of Keep Away. I could never reach the top shelf. And the basketball hoop seemed to be infinitely farther away from me than from other kids (OK, maybe there were other factors in my lack of baskets scored). But in sixth grade, my very tall friend gave me a sweatshirt that said, in glittery letters, Tiny but Tough, and that became my motto. So when my publisher sent me an image of a tardigrade (the poster children for Tiny but Tough):

and asked what I thought about doing a book on minibeasts, I jumped at the chance. I decided right away that it would be about not just minibeasts, but the superpowers of minibeasts. Because there are plenty of upsides to being tiny.

I read a giant stack of science papers while researching this book, and I learned about SO many fascinating creatures. One of my favourites is the water scavenger beetle (Regimbartia attenuata). These guys are just round black dots, a few millimeters long. They look completely unassuming. They don’t have any obvious defenses, and if a frog tries to eat them, well, it succeeds. They get swallowed. <gulp!> 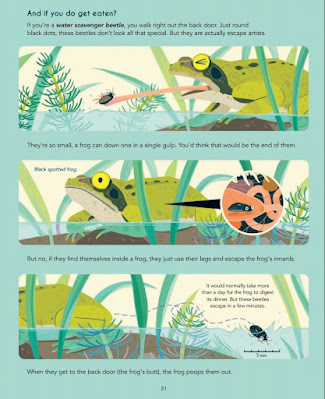 That is not the end of the story. Because after being swallowed, these beetles walk right out. That’s right—they get swallowed, and they don’t care. A few minutes to a few hours later, the beetles emerge ALIVE from the frog’s butt. It’s not clear whether the beetles hike out through the frog’s intestines, or whether they tickle the frog’s innards, maybe by wiggling their legs, encouraging it to send them speedily on their way.* Either way, these otherwise inconspicuous creatures are escape artists par excellence.

Along the way I learned that larvae of the horse mint tortoise beetle (Physonata unipunctata) defend themselves by carrying a poop umbrella with their butt. That Asian jewel beetles (Sternocera aequisignata) camouflage themselves with glitter. That the walnut-sized bobtail squid keeps glowing bacteria in its belly, to disguise itself as a moonbeam while it feeds in the nighttime ocean. And that because ogre-faced spiders listen with their legs, they can catch prey while blindfolded (and yes, scientists make tiny blindfolds for spiders). 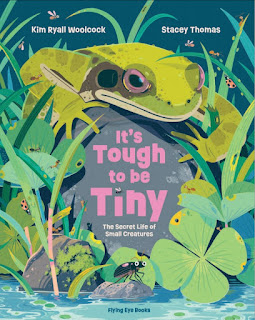 If you’d like to learn more about the amazing world of minibeasts, check out my book It’s Tough to be Tiny:The Secret Life of Small Creatures, illustrated by Stacey Thomas (Flying Eye Books, 2022). It’s all about the superpowers of small creatures, from springtails to cone snails, and how they stay safe, hunt for their lunch, or buddy up with bigger creatures for the benefit of both. It’s full of glitter and gross, because nature is both.

I’d like to know, which superpower would YOU choose?

* Wax-coated beetles didn’t make it out.

Email ThisBlogThis!Share to TwitterShare to FacebookShare to Pinterest
Labels: It's Tough to be Tiny, Kim Woolcock, small creatures

What do you think you already know about wearable technology? What are you still curious about?

Superpower? The Wearable-Tech Revolution is about wearable technologies—how they work and how they can empower people to live better lives. From smart clothing to virtual reality to exoskeletons, wearables are changing how we live and giving us superpowers! Super strength. Super hearing. Super vision. Super connection. Super intelligence! These may sound like good things, but what if super strength results in endless work? What if hackers can read our thoughts? What if living in a virtual world affects our humanity? Innovation can have downsides!

In the book, readers meet engineers, designers, scientists, and young inventors exploring the pros and cons of technology and navigating the next tech frontier of wearable computing.

There are many pros; for example, imagine being totally alert but unable to walk, speak or move your hands to turn on a light switch. It’s like you’re locked in your body. Now imagine a technology that helps you do things using only your thoughts. That technology is called a brain-computer interface (BCI)

A BCI allows a direct communication link between a person’s brain and external technology so that they can control that technology.

Or, what about virtual reality (VR) applications that allow surgeons to practice their skills without harming patients, help pilots safely test new landing maneuvers, or help us all improve our athletic skills.

But what if the same BCI technology will one day be able to read your mind? And what if the same VR technologies plunge us into living in a metaverse where all our human interactions are digital? Scientists already know that kids who use VR can become more confused than adults about what's real and what's not.

Technology influences us and shapes us and our society; it always has, and there can be many benefits. But is there a line that innovation shouldn't cross? And where is it? Just because we can meld our minds and bodies with machines, should we? And how do we ensure it's safe for those using it?