Everything Old is New Again

An atlatl is a throwing stick. It’s a tool used to extend the reach and flexibility of a hunter’s arm so that he or she can throw a light spear farther, harder, and faster. And very accurately. The word atlatl comes from the Nahuatl language of the Aztecs, who used atlatls in hunting and war.

At its simplest, an atlatl is a stick with a hook at one end. The hook fits into a dimple in the base of the spear – usually called a dart. The hunter holds the atlatl and dart in one hand, sweeps both forward in a throwing motion, and lets the dart fly.

Sounds simple, but it’s so effective that people on all continents have used atlatls for thousands of years, and many still use them. Although it has been overshadowed in most cultures by the bow and arrow and by firearms, an atlatl is still a cheap, easy-to-make, and easy-to-use hunting weapon. All you really need to make one is a small knife and a straight-ish stick.

Of course, not all atlatls are simple sticks. Humans like to embellish their tools. A couple of atlatls found in dry caves in France have carved images of animals that have been extinct in Europe for thousands of years. An Aztec atlatl in the British Museum is elaborately carved with images of warriors or gods and covered with gold.

I first heard about atlatls in the late 1990s, when I lived in the Yukon. A friend, Environment Canada caribou biologist Don Russell, was asked to confirm discovery of what appeared to be huge quantities of caribou droppings melting out of a high alpine ice patch near Whitehorse. (For the full story, see my book Out of the Ice: How Climate Change is Revealing the Past.)

Don spotted something odd lying on the rocks beside the ice patch. It was a stick. Far above treeline, with no other wood around, he found a stick – with what looked like string wrapped around it and a tattered bit of feather.

“Cool,” said the archaeologists (more or less), when presented with the stick. “Part of an arrow, maybe even a century old. Very rare.” But testing showed it was even cooler. The stick was 4300 years old, and it wasn’t an arrow. The tell-tale dimple at one end showed that it was the remains of an atlatl dart. Long ago, around the time that ancient Britons were building Stonehenge, a hunter in the Yukon mountains flung a dart at a caribou – and missed. The dart disappeared into the snow and ice where the cold preserved it.

That was the first direct evidence of atlatl use in the Yukon. Wood normally disintegrates in a few years unless it’s preserved in some way – usually by extreme dryness or extreme cold. Cold is what saved the Yukon atlatl dart, and it has preserved other things too. Lots more wooden artifacts, including the rest of the dart Don found, have been discovered in the ice patches, as well as bone, antler, leather, and other materials that normally don’t survive for thousands of years.
Today, most school kids in the Yukon know about atlatls and might even have tried their hand at them. Elsewhere, too, people are experimenting with atlatls. There are even formal atlatl competitions and modern atlatl hunters. It is, indeed, a case of “Everything old is new again.”

If you want to know more about the Yukon Ice Patches and see some of the finds, check out The Frozen Past, an illustrated booklet produced by the Yukon Government and the First Nations involved in the ice patch research.

If you'd like to see video of people throwing atlatls, here is the 2012 Atlatl Competition at Anasazi State Park Museum in the United States. 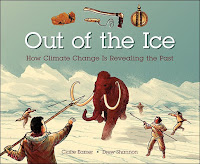 And, of course, you can always consult my own book -- Out of the Ice: How Climate Change is Revealing the Past (Kids Can Press, 2018) -- for the story of the Yukon discoveries and frozen discoveries elsewhere in the world.