Spring Break Into Science - Science Books, That Is

Every author's hosted a book launch or other event where not a single person shows up. We even have a theme song about it:


One of the best ways to avoid this kind of despair is to host a book party with friends, and that's what some of the Sci/Why bloggers are doing on Saturday, March 7.

Because we live in Nova Scotia, Ontario, and Alberta, an in-person event wasn't going to be practical. That's why the party is taking place on Facebook - and because it's a public event, anyone can attend, no matter where in the world they happen to be. Those in Australia might have to lose a bit of sleep though, as the party is from 1:00-5:00 pm EST (apologies, Australian friends!).

Can't hang out online all day? No problem! Each author is hosting her own hour:

and you can pop in and out at your convenience. The event will be a great way to discover new books, explore science facts and other fun stuff, and kick off a science-filled Spring Break.

Will there be prizes, you ask? Why yes, in fact there will! Everyone who purchases a book during the event will receive a small gift - in my case, I'll mail out a personalized, autographed bookplate and a small bonus surprise. Purchasers will also be entered into the four grand prize draws for extra books and/or awesome book swag.

So consider this your invitation and click through to join the event - no "friending" is necessary. But feel free to invite your friends or otherwise spread the word. The more the merrier!

Traditional fishing methods are not only the use of a simple hook and line, or tickling fish in a stream. There are surprisingly effective technologies for catching fish, technologies that were used traditionally by First Nations people. Here on the coast of British Columbia in Canada and Washington State in the USA is the area called the Salish Sea, after the Coast Salish-speaking people who have been living here since the end of the last Ice Age. Saltwater fishing techniques were developed to a science by these coastal people.

But the use of Salish reef-nets fell out of practise when these nets were banned by the Canadian government over a hundred years ago. It was only through the efforts of several people living on the Saanich peninsula (in and near the city of Victoria, BC) that the first reef-net in a hundred years has been built and put to use.

Leading their project is Nick Claxton (XEMŦOLTW̱), a member of the Tsawout community and a PhD candidate at the University of Victoria in the Department of Curriculum and Instruction. He worked with a local school and members of the W̱SÁNEĆ nation to build a model of a traditional reef-net. The project was so successful that teachers throughout the school—math teachers, science teachers, socials teachers—began to teach their subjects through the model net.

Then, with the help of relatives from the Lummi Nation just across the border in Washington state, Nick and his associates built a reef-net in the traditional style. They put it to use on August 9, 2014, at a hereditary fishing location off Pender Island, as shown in this video they posted on YouTube.


Their short video will give you a sense of the power of that day and what it means to “carry on our fisheries as formerly,” as agreed to in the Douglas Treaty signed by the Saanich people in 1852.

If you're wondering what's so different about one net compared to another, well, there can be a lot of differences! This isn't a little net held and retrieved by one person. A reef-net is suspended between two open canoes. The upper part of the net is attached to floats, and the lower part is held down by weights.

If the video of this net being used doesn't load on your screen, you can click here to see a six-minute video, showing the project and the reef net being deployed.


Posted by paula at 9:28 pm No comments: Links to this post

What do science writers do when they go on vacation to the Big Island of Hawaii? If you are Shar Levine and Leslie Johnstone, you look for science at the beach.  At 'Anaeho'omalu Bay, or "A" Bay as the locals call it, the pair spent an afternoon at the anchialine ponds located between the Marriot Hotel and the beach. 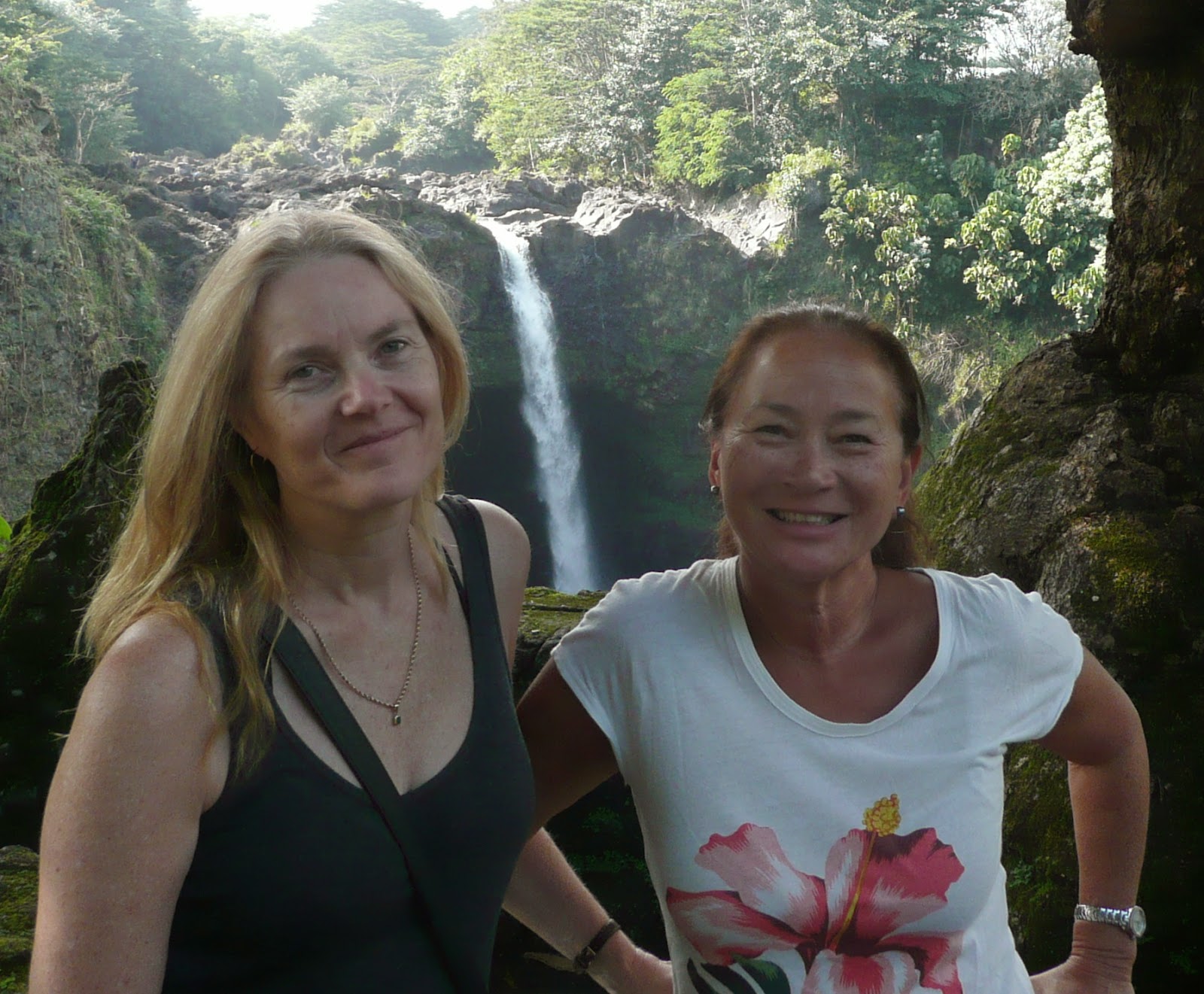 Anchialine ponds are only found on two of the Hawaiian islands, Hawaii and Maui. These small inland ponds are found close to the ocean but are not connected to the surface of the sea. Salt water from the ocean seeps through the ground where it is mixed with fresh water flowing from the mountains. The pond is less salty than the ocean, but more salty than fresh water from a stream. The mixture of the two creates a unique "brackish" water for the fish living in the pond.

Hiding in the algae and water plants along the sides of the pond you can see shrimp, crabs, mollusks and tiny fish.  Much to the delight of tourists, an eel will sometimes poke its head out from the lava rocks in the waters just below the bridge connecting the pond to the beach. In the deeper section of the pond, large fish including amberjack and barracuda patrol the waters. The salinity of the pond varies with the depth and temperature of the water. Creatures who live in these waters are different from their relatives who live in the ocean and scientists are interested in studying how the fish have adapted to survive in this environment.


The ancient Hawaiians used these ponds as an early form of fish farming. There was very little work for the people to do. Small fish would enter the pond through a gated channel from the ocean to an outer pond. From there, the fish would thrive on algae and plants growing in the waters. The fish soon became too big to leave the pond through the gate. When the fish were adults,  they could easily be caught in a net and served for dinner. 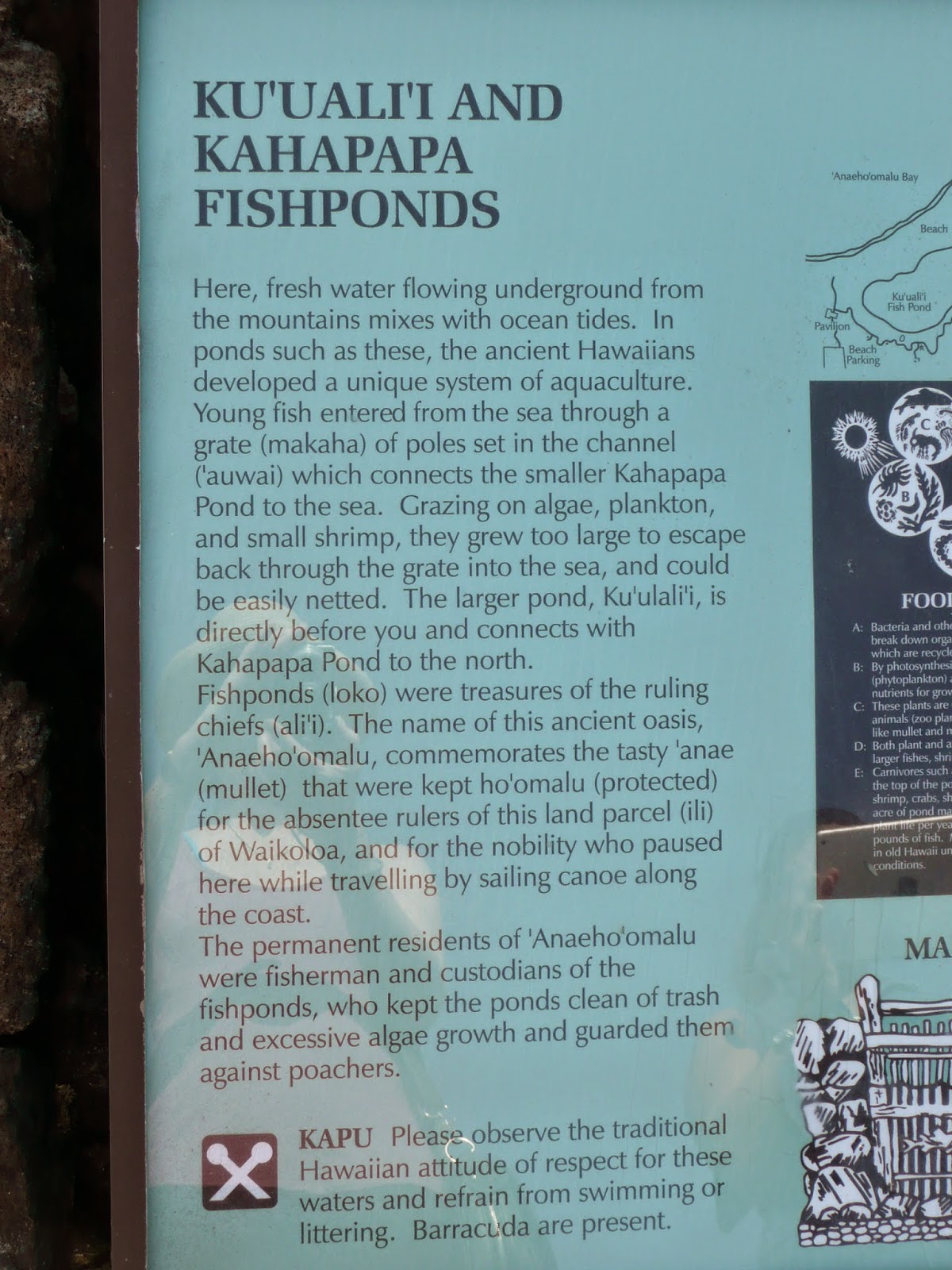 The ponds form their own ecosystems. Here's how the food chain works: 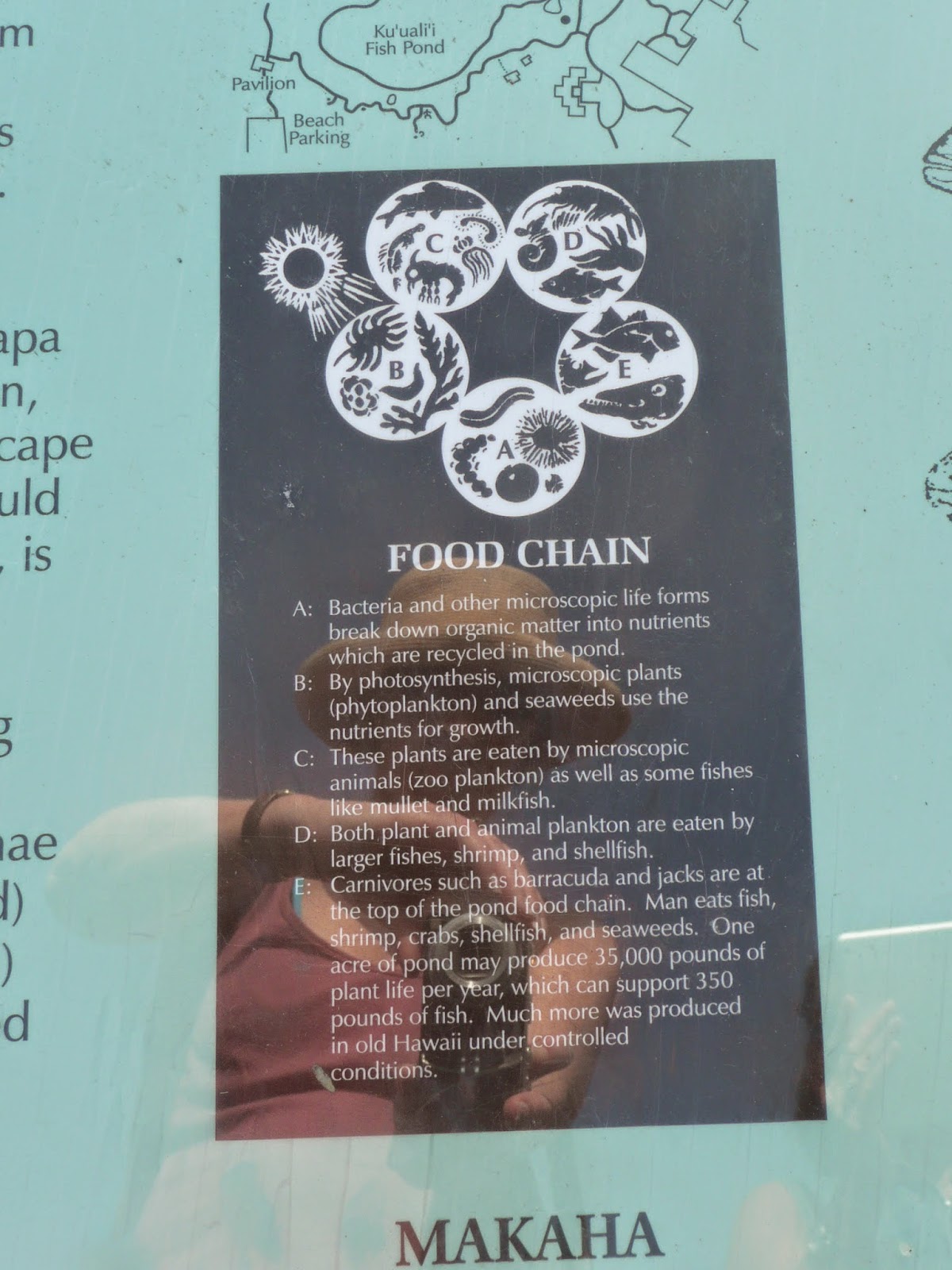 Posted by shar levine at 6:34 pm No comments: Links to this post