A quick summary of how our eyes work: they refract (bend) light and focus it on the retina. The job of doing the refraction is split between the cornea and the lens. Two thirds of the refraction is done by the cornea, so it's critical in enabling vision. After light passes through the cornea, it passes through the pupil (in the centre of the iris) to reach the lens. Muscles in the eye (the ciliary muscle) can change the shape of the lens and allow the eye to focus nearer or further. The lens focuses light on the retina, which passes signals to the brain via the optic nerve. 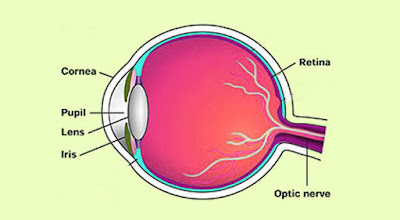 It's all pretty neat, but some things can go wrong, especially as you get older. Common problems are that the lens and/or the cornea can become cloudy.

When this happens to the lens, it's called a 'cataract'. Medical science has done an incredible job of fixing this problem. It sounds pretty radical and perhaps icky, but here's what ophthalmologists do: they make a tiny incision in the eye, suck the lens right out with a tiny 'vacuum cleaner', and put a plastic replacement lens in place. If you needed glasses before the surgery, the new lens will be the same prescription as your glasses and you won't need glasses after the operation. While it sounds complicated, the surgery takes less than 30 minutes and is done on an outpatient basis – no hospital stay is needed! Tens of millions of these operations are done every year, with a success rate of 98%.

But when it's the cornea that gets cloudy, it's not that easy. It's possible to do a corneal transplant. A section of the cloudy cornea is removed, and replaced with a section of cornea from a donated eye from someone who has died. This surgery is much more difficult than cataract surgery, and of course it's dependent on having a suitable donor. Only tens of thousands of these operations are done, and the success rate is around 80-90%. More corneal replacements would be done, but there just aren't enough donated eyes.

So all of this means that a new idea for treating cloudy corneas is very exciting. Instead of transplanting human corneal tissue, a company called Corneat Vision has developed a synthetic cornea. The procedure is to remove a disc of the cloudy cornea and implant in its place a nanofiber 'skirt' with a clear lens at the centre. The skirt is made up of a sort of a nanofiber skeleton which corneal cells will grow into. The 'magic' of this device is the nanotechnology fiber and how cells grow right into the skeleton, making the implant really part of the eye. 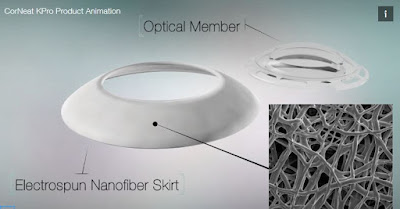 Nanotechnology is becoming a very important field. It deals with particles ranging in size from 1-100 nanometers. A nanometer is one millionth of a meter. That's pretty small: a newspaper page is about 100,000 nanometers thick. When you get to the nano scale, materials start behaving differently, because you're getting to the scale of individual atoms and molecules. Atoms are about .1 - .5 nanometers in diameter, and molecules are over a nanometer across.  Finding out how materials behave differently on a nano scale and finding uses for that, is what makes the field so exciting.

More on nanoscience and nanotechnology in future blogs.
Posted by Simon Shapiro at 10:52 pm