There’s nothing like a pandemic to make people want to be more self-sufficient.
First, everyone stocked up on toilet paper and flour. You never knew which shelves would be empty the next time you ventured into a supermarket. It even became difficult to buy new laying hens since, suddenly, everyone wanted chickens. And everyone, it seems, wanted to grow their own food to be on the safe side.
Once school was discontinued, my ten year old grandson Nico watched more movies than normal. One of them was a fabulous documentary called Biggest Little Farm which you can find at this link. The film follows ten years of a young couple who buy an acreage and, never having farmed before, turn dead soil into a gorgeous lush farm. The film is inspiring on so many levels, and not just to adults. 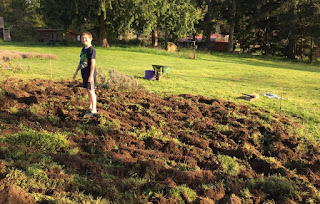 Three days after viewing it, Nico came to get me. “I want to run my own farm,” he announced, asking if he could use a flat piece of land on our 5 acres. The piece of our acreage which he selected was outside our deer fencing and thus not a good choice. But we soon found another, better suited piece of level land which is protected from the many deer that roam our island. He staked it off and, after promising to do all the weeding and watering, it was his. 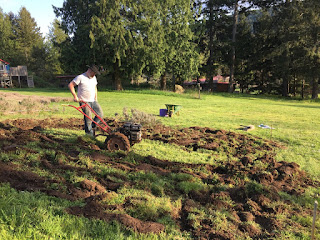 His dad happened to own an old-fashioned plow so he turned the grass. Nico spent the next week on his knees, pulling grass and weeds from clumps of clay. 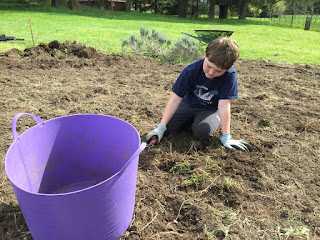 He designed a garden plan with beds and paths.
Friends donated berries, seeds and seedlings. We also made a trip to a local organic farm for some seedlings which he nurtured in a bay window until the weather turned warm enough for planting. 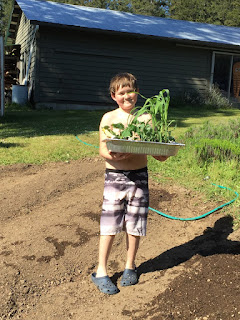 By early May, in the Pacific Northwest, it was time to plant. Nico chose his own crops: corn, peas, potatoes, squash and more. 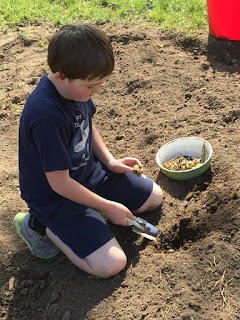 He planted, pulled more weeds and watered. He also had to put up a small fence to keep rabbits from helping themselves to his hard earned veggies. All of the weeds he pulled, sometimes helped by his younger brother, were donated to the chickens who munched happily and turned the greens into eggs. 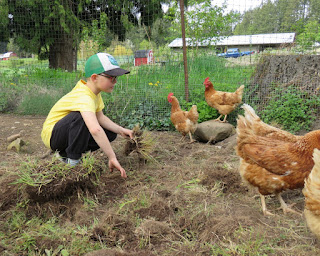 In turn, we put egg shells, coffee grinds and vegetable waste into our composter and mulch compost into the soil. Growing veggies is a never ending circle. 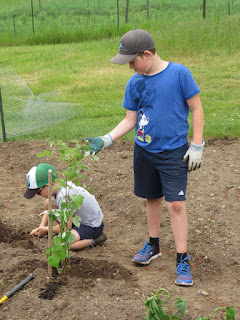 By June, the potato greens were up and the peas were climbing the bamboo stalks. In July the corn grew over his head and the tomato plants had yellow flowers.
By early August Nico was able to harvest the first huge zucchini and share it with his family for dinner. 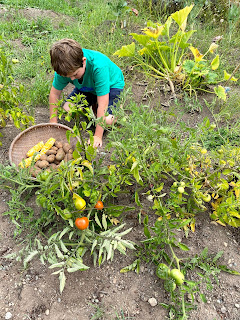 Hopefully 2021 will be a better year for the world, without a pandemic. But the science of producing your own food is here to stay. And hopefully Nico will be inspired enough to keep growing his own vegetables and munch on snacks that he nurtured himself, from seeds to fruits. 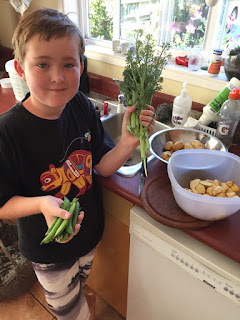 Here are names of two books to consult if you want to start your own garden:

Watch Me Grow! and
Up We Grow! by Deborah Hodge.

Posted by Paula Johanson at 4:30 am