SPOTting the Deep Past

This summer, I went journeying Into The Deep Past again. This time, it wasn't a chance to walk through my home neighbourhood again and see the geological changes that have shaped the world around me. Nope! This time, instead of the familiar hills and ocean shorelines of Vancouver Island, I was exploring the Alberta Badlands along the Red Deer River.

There are so many ways of showing that process of being in a place and learning to understand what we are seeing. My daughter Lila Kladreau is a professional photographer; she took the photos above and below, which show me setting out on the river in an inflatable kayak that has served me well in many places close to home, and now on the river.

These photographs contrast well to the painting artist Suzanne Robb made of another location a day's paddle downstream from my launch point. Here, Suzanne shows the striking patterns of weathering that are so visible from the river. The deep runnels that cut into the layers of sediment expose fossils from millions of years ago, when this area was under the shallow Bearpaw Sea. 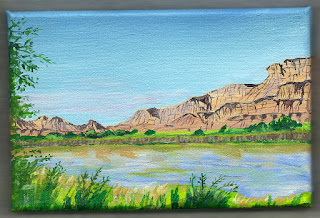 Suzanne's painting shows the colours as they are felt, instead of the muted way they are shown in Lila's photos. Eroded hillsides looked like dinosaur bones sticking out of the clay and sand -- and yes, there are dinosaur bones all through the sediments from 65 million years ago and older! Other eroded bluffs along the river banks have round faces like Mount Rushmore, and some crumbles have sharp broken edges like profiles of faces looking up-river at the Buffalo Jump.
It's wonderful how different people can be in the same place and create different ways of showing what they have learned. I'm not the photographer that Lila is, nor the painter that Suzanne is. I use other technology to help show people where I've been. One of my best tools is the SPOT device. It's a small electronic device a little bigger than a cell phone. Press the OK button, and it sends a signal to any passing communications satellite to send a pre-written message to up to ten of my friends, with a link to my GPS location on a map.

The map of my second day's travels shows that I went through Dry Island Buffalo Jump Park and camped near Tolman Bridge. The spot marked 4 on the next map shows where I looked at the buffalo jump and the mesa called Dry Island. Some maps look better on a satellite photo, like this one that even shows the shadow of a few little clouds.

The buffalo jump is impressive if you know what you're looking at; a cliff becomes a cliff where the buffalo would fall, not just a crumbly bluff. And below wasn't just a jumble of muddy crumbles mixed with old bones. It was the place where people would have been waiting with spears to finish off the buffalo, after the runners had driven them off the cliff. Falling a hundred feet onto its head doesn't kill a buffalo. But the fall does stun it or break a leg, so it's easier to kill. And then, there's lots of water here from the river and a nearby stream, for the butchering and cooking. The science of buffalo hunting makes sense when you can see the cliff and the water.
The river makes more sense in some ways, too, when I see it on the map that shows how few roads there are in this part of Alberta, or on the satellite photo that shows how the river gouged out its little canyon through this dry land. The SPOT is no substitute for a camera, but it's a good tool to have for keeping track of where I've been. Ultimately, nothing matches being there, feeling the slippery clay clinging to my feet, or the tea-brown river quietly slipping between banks where cattle graze and swallows dart.
Posted by Paula Johanson at 1:37 am No comments: 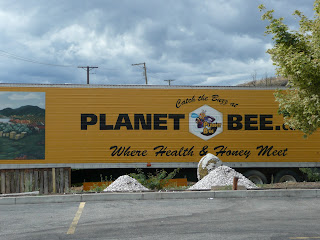 Photo and Video by Shar Levine, taken in Vernon, BC at Planet Honey.

In my book, "Paperbook and Papermaker", I wrote about wasps who were given colored paper to munch on and who, in turn, produced rainbow colored nests in the confines of the scientist's screened sunroom. I'm certain the scientist's wife was less than pleased to have this experiment buzzing around her home, but that's a different story and I digress.

Flash forward to summer of 2012 when bees in France began creating colorful honey.  Andre Frieh, an apiarist who lives near Colmar in the eastern part of France, was stunned to discover that honey from his hives was technicolor shades of blue and green.  Fingers were soon pointed towards the local M and M candy factory where residue from containers was thought to be the cause of the unique shades.

As any honey lover knows- describing something as "honey colored" can have different meanings. Honey can be light yellow to deep amber, or almost brown.  It has different flavors depending on the kinds of flowers bees were visiting. There's Buckwheat, MacNut, Clover, you name it.

While it might seem shocking to know that bees will be drawn to junk food, this is not the first time the insects have chosen artificial over natural sugars.

In November of 2010, bees near the Dell's Maraschino Cherry Company in Red Hook, New York began producing red colored honey.  Samples sent to test labs confirmed that the honey contained Red Dye No. 40, which is, as we all know, the color that gives maraschino cherries their vibrant look.

If bees don't know they ought not to be eating junk food, what hope is there for the rest of us?

I love visiting different places and learning from different cultures. My husband and I have moved a whopping 24 times! With our children, we once traveled for a whole year. And with an adventurous park ranger father and a writing mother, it might be natural that my children did not find jobs that offer any kind of monotony or lack of excitement!

While both of my sons are avid divers, my son Alex is currently working toward a captain’s license on the MV Nautilus Swell. This refurbished tug boat is now a small, luxurious cruise ship that carries extreme divers to Alaska. The company’s other boat, the Nautilus Explorer, sails to Mexico where they dive with great white sharks (http://www.nautilusexplorer.com/guadalupe_great_white_shark_diving).

I am not a diver but the photos and stories my kids share, make me wish I could explore the ocean depths in person. You can see some photos of their cruises here: http://www.nautilusswell.com/

The other day Alex sent me an email:
“Rough day at the office. It was noisy. Bald eagles wouldn't stop screaming at each other over the salmon that were running in the stream nearby. It was hectic. Three grizzlies and a black bear on the beach while at the same time a group of humpbacks swam through our anchorage - didn't know which way to turn.” That does sound like a rough day at the office!
He shared a video with me that I love. If you want to be a marine scientist, you will love it, too. Here it is: 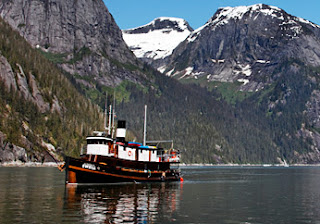 Imagine you’re a sailor more than 300 years ago. A storm takes you out of sight of land and you don’t know your location. You worry you could run out of fresh water and food or pirates might attack. Clouds hide the Sun and make it difficult to tell your direction. You have a compass but maps in the 1700s are not very accurate. With night coming, all you can do is hope your ship doesn’t hit any rocks.

Now suppose your only compass falls into the sea! Good thing you know a bit about celestial navigation. If the Moon should rise before the Sun sets, you will be able to tell your direction. The rising Moon is illuminated on its west side because the Sun sets in the west. But if you look after midnight, the eastern side is lit.

If the sky clears you’ll be able to find Polaris, the North Star. You can use your sextant to measure the angle of a star or other celestial body. This tells you your latitude—how far north or south you are from the equator. Celestial navigation can save your life. But you still need to know your longitude—your direction east and west.

A carpenter named John Harrison spent many years trying to solve the problem of determining longitude at sea. He realized that if you knew the time at a specific location on land, as well as your exact time at sea, you could figure out your longitude. Unfortunately, time pieces were not very accurate at this time. Clocks with pendulums could not keep accurate time on a boat. 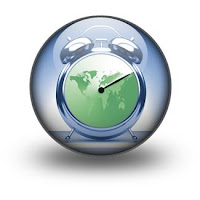 Harrison devoted his life to solving the problem but it took the King of England to make sure he got the recognition he deserved. Thanks to Harrison’s work, everyone on Earth recognizes the same time zones. 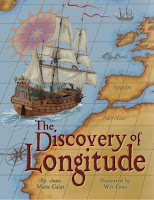 You can read his story in my newest title, The Discovery of Longitude. This historical picture book for ages five and up
is published by Pelican
Publishing Company. Visit www.joangalat.com for details.
Posted by Joan Marie Galat at 12:02 am No comments: