This summer I visited Newfoundland. I’d heard lots about its attractions - people, music, scenery, food, icebergs, whales, puffins. But I was surprised at what a world-class fascinating place it is for geology. Gros Morne National Park, on the west coast, is a case in point.

One of the landmarks in the area is the Tablelands mountain range, a reddish lump of rock over 700 meters high, and totally barren of plant life.

For once, the lack of vegetation isn’t because humans cleared it all. It’s because the rock itself is toxic to plant life. The area is a UNESCO-designated World Heritage Site because it’s unique. The Tablelands consist of rock from the earth’s mantle. This was discovered by geologist Bob Stevens in the 1970’s and it was an important factor in the acceptance at the time of the tectonic plate theory.

The earth is made up of layers: core, mantle and crust.

Everywhere (almost) the mantle is covered by the crust. The Tablelands is unique in exposing a large chunk of the mantle. The mantle contains a lot of metals: iron (accounting for the rust-red colour), magnesium, chrome, mercury, platinum, nickel. And that's why it's toxic to plants.

Over time, the effect of water on the rock creates serpentinite, a lovely texture like – of course – a snake skin. 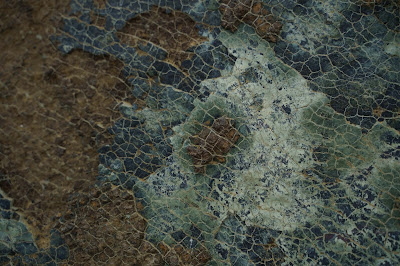 
This theory was hotly disputed as late as the 1970’s but has now been generally accepted. The earth’s crust consists of a number of plates which slowly float around on the surface of the mantle. Occasionally (very occasionally) they crash into each other and then drift apart again. Right now the North American plate is moving North-West at a rate of about 2.3 cm (not quite an inch) every year.