Big Pharma is Not Suppressing the Cure for Cancer

Lately my Facebook feed has filled up with memes and videos about miracle cures for cancer that THEY don't want you to know about. I've avoided commenting on them, because I don't want to offend my friends, but every time I see one of these things, I spontaneously combust.

Look, I get it. I lost my mother to cancer in 2009, two days before her 56th birthday. I have lived the rollercoaster of pain and grief and desperation that cancer causes, and I would have given anything for a miraculous Australian plant to implode her tumours in one tasty and side-effect free treatment. So would she, believe me.

I'm not an oncologist or a cancer researcher, but I am a geneticist. And since cancer is a genetic disease, it got covered at length during my schooling. Which means you can trust me when I say that Big Pharma is not suppressing the cure for cancer. Even leaving aside the logistics of maintaining a conspiracy on that scale, it's just not possible, because there is no single cure for cancer, and there never will be.

Because cancer is complicated.

We call it cancer as though it's a single condition, like Type I diabetes or ALS, but "cancer" is actually an umbrella term for dozens of further categories of disease. They all have one thing in common - the mechanisms that control normal cell division in our bodies (the kind that seals that nasty paper cut) break down. Without those controls in place, the cells just keep on dividing, forming tumours and rampaging through the body. But here's the thing. Although the end result - out of control cell division - is the hallmark of cancer, the pathway by which cells lose control is always different. Always.

That's because the systems that control cell division are encoded in our genes. And the mutations that destroy those systems are accidents. They are random. Mutations can happen in any gene at any time. Acquisition of a collection of mutations that cause the failsafes to break down is completely coincidental.

Which means that every single cancer patient's cancer is unique. And that's why it's so difficult to treat. Cancer doctors and researchers have no choice but to play the odds - to attack the things that different cancers often have in common. But they can't account for the endless variation, no matter how hard they try. And they can't prevent cancer cells from continuing to mutate, becoming resistant to treatment - just like bacteria become resistant to antibiotics.

And that's why there will never be a magic bullet cure for cancer. It's not because cancer researchers aren't motivated - many of them choose to study cancer because they've lost loved ones of their own. And it's certainly not because there's too much money is keeping people sick (which is patently ridiculous - every economist will tell you that sick people cost money). "THE CURE" will never be found because cancer is a moving target, and worse, it's a target that's embedded so deeply within us, it can never be fully eradicated.

So stop with the memes, please. Just stop. And if you want to know more about what cancer medicine is really up against, do yourself a favour - read Siddhartha Mukherjee's The Emperor of All Maladies. It will make you grateful that cancer medicine has come as far as it has.
Posted by L E Carmichael at 8:47 am 1 comment:

Nanotechnology deals with particles ranging in size from 1 to 100 nanometers. A nanometer is one millionth of a meter. That's very small: a newspaper page is about 100,000 nanometers thick. Atoms are about .1 to .5 nanometers in diameter, so nanotechnology works at a molecular level.

Materials start behaving differently at nano scale and scientists are learning about this behaviour and finding uses for nano materials. One of the success stories has been graphene and carbon nanotubes.


Graphene consists of a lattice of carbon atoms in a hexagonal pattern. It's a sheet of carbon one atom thick. And it's the strongest material ever discovered – 200 times stronger than steel, but also very light and flexible.

Graphene can be formed into a cylindrical shape, which is call a nanotube. It's light, strong and stiff.

So what does nanotechnology have to do with tennis? Would you believe tiny tennis players hitting electrons across a 1 nanometer high net? No, me neither.

In the early 1970s an aeronautical engineer by the name of Howard Head, revolutionized tennis by inventing a racket with a much bigger face. It was a huge improvement over existing rackets especially for average players. Head did this by making the frame out of aluminum, instead of wood, which wasn't strong enough for larger rackets. (This was Head's second sports revolution: 25 years earlier he had developed plywood/aluminum/steel/plastic skis which blew away the existing solid hickory ones. You can read about this story in my book Faster, Higher, Smarter.)

Head's idea of a larger racket face is still the dominant design, but technologists have been working away to improve the materials used. And the most advanced rackets today all use graphene sheets or nanotubes to make portions of the racket lighter, stronger and more rigid.

Silica (silicon dioxide) is another nanotechnology material used in tennis rackets. Silica nanoparticles are used to fill the gaps in other materials, for example between nanotubes. The silica adds stability and strength, without adding much weight.


Still with tennis, balls use clay nanoparticles on the inside membrane. These silicon oxide particles are tetrahedral shaped molecules which form a barrier to gas. No gas leaking out gives the ball a longer life.

Fullerenes (or Buckminsterfullerenes, or just "Buckyballs") are carbon molecules made up of 60 carbon atoms linked into pentagons and hexagons, forming a structure that looks exactly like a soccer ball. It also looks like a geodesic dome. (The American architect, Buckminster Fuller, popularized the geodesic dome, earning him the nano-homage).  While we're on the subject of appropriate names, one of the three Nobel laureates for discovering Fullerenes was Richard Smalley!


Buckyballs are also used in tennis rackets, to make them lighter and more resistant to twisting.

Nanotechnology is used in lots of other sports equipment.
Nanotechnology is really important in other industries, of course: electronics, pharmaceuticals, textiles, food ... More to come in future blogs.


Posted by Simon Shapiro at 9:00 pm No comments:

The Science of Walking and The Art of Problem-Solving 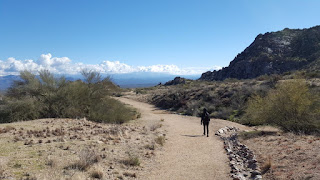 My wife, Jo, and I are ardent hikers. She more than me, actually. Jo outpaces me on every trail, faithfully charts her steps with her Garmin, and competes with others online. I’m a bit slower, usually a quarter, perhaps a half kilometre behind. I track my steps, too, as well as heart rate and total distance, but I’m more interested in how far I’ve gone. 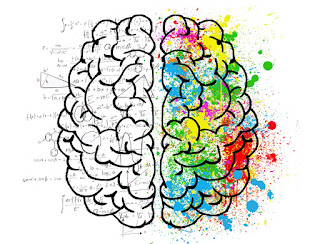 A study conducted at the University of British Columbia found that regular brisk walking increases the size of the hippocampus, the brain region that monitors verbal memory and learning. Stanford researchers, meanwhile, discovered that creativity jumped 60% when subjects walked. Other studies showed that walking for 40 minutes three times a week Increased performance on cognitive tests and reduced declines in brain function as we age. It didn’t matter what kind of walking – whether on a mountain trail or on a treadmill – the benefits were the same.

Many problem solvers incorporate walking into their regimen. Aside from the physical benefits, walking is a way to wipe the slate clean, kick-start creativity, and channel fresh ideas. William Blake, William Wordsworth, and Henry Thoreau were among the many creative types who embraced walking. 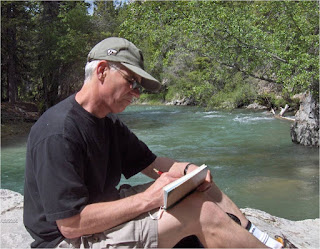 “Me thinks that the moment my legs begin to move,” Thoreau wrote, “my thoughts begin to flow.”

When I walk, my mind drifts which might explain why I sometimes lose sight of Jo and have taken a wrong turn more than once. While that’s not a good thing, the drifting part can be – at least to a writer like me. While plodding a respectful distance behind Jo, I’ve solved problems and come up with some of my best ideas.

Turns out, I am growing my brain too.  Who knew?

Posted by Claire Eamer at 4:00 am No comments: