The new year makes me think of new beginnings. Why not new bio-inspired technologies?

As microplastics clog up our newsfeeds and the biosphere, the search for biodegradable materials becomes more important. One that’s catching my attention is fungal fabric.

When many people think of fungi, they think of mushrooms or mold. Fungi are both of these things, but they are also so much more. The mushrooms that we see popping up in the rainy spring and fall are fruiting bodies, made to distribute spores. They are just the tip of the underground iceberg. Made of tightly intertwined fungal threads called hyphae, they are produced by huge webs of hyphae living invisibly in the soil, in rotting wood, in plant roots and leaves. These hyphae live inside their food, producing enzymes that degrade it, and then soaking up the released nutrients.

Hyphae can grow to form any shape (just look at the many shapes of mushrooms, from corals to cup fungi to tooth fungi), and dried mushrooms have a tough and rubbery texture. Innovators are leveraging this combination of traits to produce a wide variety of fungal fabrics. The hyphae are like the threads of cloth, interweaving as they grow. This fabric weaves itself!

Starting with waste products like sawdust or grain husks, designers add fungal spores, a small amount of water, and wait for the fungus to devour the food and fill the mold. Fungi grow quickly, so fungal leather can be produced in a matter of weeks. The resulting mat of hyphae can be dried, tanned, and dyed to produce “leather” that is strong, durable, breathable – and beautiful. 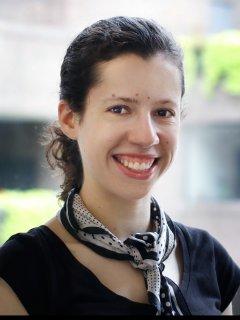 Netta Englehardt is a 32-year-old theoretical physicist. She’s a professor at MIT and is making waves for her work in resolving a decades old paradox, relating to Black Holes and Quantum Mechanics. In the 1970s Stephen Hawking came up with the Black Hole Information Paradox, and physicists have been working since then to make sense of the problem.

Hawking found that Black Holes don’t continue gobbling up matter forever. Black Holes have a temperature; large ones are very cold, but small ones a little warmer, and they all radiate energy. Eventually they totally evaporate and disappear. Just to be clear, big Black Holes can be 1/10-14 degree Kelvin (almost absolute zero), and one the size of a Coronavirus would be room temperature. And eventually is a long time – many billions of years, so don’t hold your breath. None of this is paradoxical.

The paradox comes because Hawking’s calculations showed that matter evaporating from a Black Hole has lost the information about the matter that went into the Black Hole. That’s a problem for Quantum Mechanics, which holds that all processes must be reversible. A little hard to understand because it’s not intuitive to us, living in a world where we can’t perceive quantum scale events. But it’s a fundamental principle of quantum mechanics, called Unitarity. If all the information about the Black Hole matter has disappeared when the Black Hole has fully evaporated, then it’s not possible for the process to be reversed.

The world of theoretical physics is very excited because Englehardt and her collaborators have found a different way of measuring the entropy of the Black Hole, and this measurement shows exactly what is needed – entropy increases as the size of the Black Hole increases, and then decreases as it evaporates. How do they do it? It’s so far beyond my understanding that I won’t pretend to be able to explain it, but it has something to do with the area of the event horizon. That’s the boundary beyond which a particle gets sucked into the Black Hole. And it involves an “extremal surface” where space-time is bent enormously by the forces of gravity in the incredibly dense Black Hole.

There’s a wonderful symmetry to Englehardt being a crucial contributor to solving Hawking’s paradox. Englehardt’s family emigrated from Jerusalem to Boston, when she was nine. “As a child, I loved reading,” she says. “But I didn’t speak any English. When we moved to the US, we had only taken a handful of Hebrew-language books with us. So I read everything in the house, until there was just the one last book left. It was ‘A Brief History of Time’ by Stephen Hawking”. And the rest was history.

Posted by Simon Shapiro at 9:00 am No comments: