Yes, they really doo-doo. Sorry. Yes, they really do. Back in 1966 NASA launched the Landsat program – a bunch of satellites which orbit the earth recording images at various wavelengths (blue, green, red, infra-red, etc.) The latest satellite – Landsat 8 – scans 11 different wavelengths at a resolution of 30 meters. Since Adélie penguins are mostly a lot smaller than 30 meters across, they can’t be seen individually. But where there's a will, there's a way. Male and female penguins take turns in incubating the eggs in their nests. With no bathroom breaks the penguin poo (called guano) builds up around the nest. From space, the area of the guano is easily measured, and from that the number of penguins can be estimated. It’s a lot easier, warmer and less smelly to do this observation using NASA pictures than by going onsite.

Scientists have been concerned about a decreasing Adélie penguin population and have speculated that a change in diet may have been the cause, possibly from being able to eat less krill. Krill are tiny crustaceans which are a major part of the Antarctic food chain. Penguins (and seals and whales) are having to compete with commercial trawlers for krill. The colour of penguin poo varies from white (from eating fish) to pink or red (from eating krill). Landsat imaging was able to determine from space that penguin diets have had no long term pattern of change.

Over 50 years of data is enormously useful in tracking changes.

The two images below show how part of the Exelcior glacier in Alaska has melted into a lake during the last 32 years.  Since 1994, Excelsior Glacier has retreated about 200 meters per year—nearly twice as fast as the previous 50 years.

Landsat images can also be useful for real-time action. A few weeks ago a cyclone devastated several cities in eastern India. The storm left millions of people homeless, and damaged or destroyed energy infrastructure, leaving around 3.5 million households without electric power for days after the storm hit.


The images below are data visualizations of where the lights went out in the city of Bhubaneswar. The two images show city lighting on April 30 (before the storm) and on May 5, 2019, two days after the cyclone. The Odisha State Disaster Management Authority requested the data from NASA for use in risk assessment and disaster recovery.

You can find hundreds of other fascinating images at https://landsat.visibleearth.nasa.gov/

Next year NASA is planning to send a rover to Mars. Among other things it will look for any evidence that may show if any life has existed on Mars. Here’s an artist’s impression of the rover. 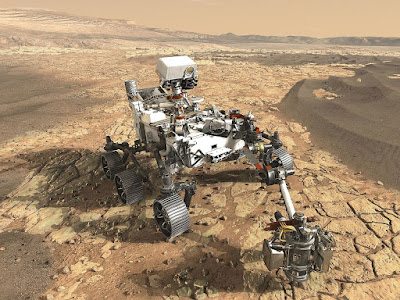 Although you can’t go along on this flight, NASA is allowing you to send your name to Mars. You’re invited to submit your name at this site:  https://mars.nasa.gov/participate/send-your-name/mars2020/

The Microdevices Laboratory at NASA's Jet Propulsion Laboratory in Pasadena, California, will use an electron beam to stencil the submitted names onto a silicon chip. The lines of text will be smaller than one-thousandth the width of a human hair (75 nanometers). At that size, more than a million names can be written on a single dime-size chip. The chip (or chips) will ride on the rover under a glass cover.

If you accept the offer to send your name to Mars, you’ll get a boarding pass like the one below, complete with a tally of your frequent flyer points.

It’s an open question whether any possible Martian life will be able to read your name, but we can hope.

Finally: Everything Old is New Again

The second Orion exploration mission is currently scheduled for 2022 or 2023. It will be a crewed jaunt around the moon and back. This will the furthest distance from earth that any humans have traveled. It will be a significant step forward in NASA's plans to return humans to the Moon for long-term exploration and future missions to worlds beyond, including Mars.
Some of the tests for this mission are to demonstrate the capability of navigation in deep space. And how do you navigate in deep space if you have serious problems with the technology? It's back to basics in a worst-case scenario. In the 18th century sailors used a sextant to measure the angle between celestial bodies (sun, moon, stars and the horizon), so as to be able to calculate their longitude and latitude. Astronauts on Orion 2 will test the use of a sextant for emergency navigation.