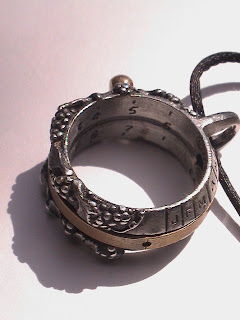 When I speak to schools and libraries, I try to find a way to show how science can relate to a child's life. But tying science to history and making it interesting is more difficult than it seems. Thanks to my writing partner, Leslie Johnstone, I have the perfect way to capture a child's imagination.
Look at the picture on the left. Is this science or history?
Usually kids guess that this is the "One Ring" from Lord of the Rings as it has markings on the inside and outside of the piece. But the writing isn't Elfish.
On the outer rim of the ring are the letters " J F M A M J J A S O N D" and on the inside of the ring are the numbers 1 through 11. There is a brass ring that rotates around the centre of the ring and in the middle of this ring is a round hole. Engraved inside the ring are words, "Carpe Diem" or "seize the day." 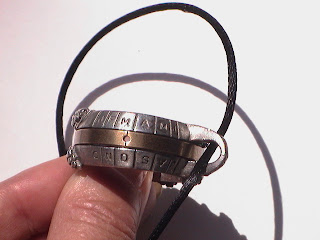 So other than a really cool piece of jewelery and very nice birthday present from my best friend, what does this pendant have to do with science and history?
You are looking at a replica of the Eleanor of Aquitaine sundial, based on the one the queen gave to her husband, Henry II of England in about 1152. Right about now kids yawn.
Most children have never heard of Eleanor, Henry and know nothing about the Aquitaine. However, ask a child if they have ever heard of Robin Hood and most hands go up. Ask them if they know which king went to the crusades with Robin Hood most know the name of Richard the Lionhearted. And generally kids will have heard of his evil brother, King John. Now you have their attention. Let's not get into the fact that Robin Hood as portrayed in movies and books, was fictional.
When Eleanor married Henry, she was one of the wealthiest and most powerful women of her time. Marrying Eleanor was a pretty smart move for Henry as he now had access to money, lands and political influence. Eleanor like throwing lavish parties and wanted Henry to be back in time for dinner. Now frankly telling your husband he needed to be back at the castle no later than 5 pm had no real meaning as well, wrist watches would not be invented for another 500 or so years.
To solve this problem, Eleanor had a beautiful sundial made for her husband. This way he could always tell what time it was. Henry also commissioned an even fancier one for his wife made from gold and set with diamonds. And how did this romantic gesture work out? Sadly, there wasn't a "happily ever after" ending. Henry imprisoned Eleanor in a castle and went off to hunt and party to his hearts content, never having to see what time it was on his sundial watch. 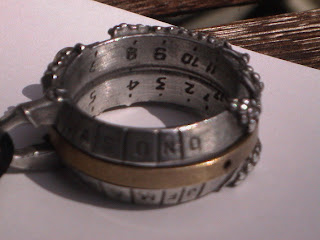 Now the science. Turn the dial so that the hole aligns with the month. Turn the hole towards the sun so that a ray of the sun shines through the hole. Where the ray lands will tell you the hour.
Did you know?
When asked most people will say that "A.M." means "after midnight". In fact a.m. and p.m. mean "Ante Meridian- Latin - before midday" and "Post Meridian- Latin "after midday".
Posted by shar levine at 4:18 pm

This is really cool! Too bad for Eleanor, though...

Incredibly cool, Shar. Both the story and the actual ring.

I love the look of this thing, but I think we may have found the simplest possible device to be country-specific.

By the looks of it the months ring thing is calibrated to a particular latitude, so it won't even work properly over the entire USA. It appears to be measuring the declination of the sun, and at a particular hour in a particular month in Florida this will be massively different to the declination at the same time in Alaska...

If I've got this wrong, will someone please tell me why? My engy-sense is tingling off the scale that it's screwy but I'd love to be told I'm wrong so I can buy one!

P.S. This is a re-post of the same question on the think-geek product page, trying to get as many eyes on it as I can... (http://www.thinkgeek.com/gadgets/e56d/)

Dear Dr Wood,
I agree that it will not work at all latitudes. However, I believe it would work equally well at the correct latitude north or south of the equator.

Just bought one of these sundials for $1 at a flea market because it just looked cool. Have been searching and searching for what it is. thanks so much for solving the mystery! Looks exactly like your image.

Most comments state that the Aquitaine Ring is accurate for only a certain latitude If so, what is that latitude? New York City is 41 degrees North so the many potential purchasers who live there would certainly like to know

I found one of these in a junk drawer sale!!!! Mine is a gorgeous bronze and silver, with vines. So glad I know what it is now!!!!

I have one my friend gave me because he couldn't figure out what it was..it has acorna & Leafs

The ring is roughly calibrated to the latitude of London 51.5 degrees. My model of the ring has 3 marks that can be used to calibrate it to just about any latitude. I can read the time to 15 minutes. If the ring were much bigger it would be more accurate. I live in north central Texas. I have an H.M.Kala sundial that is accurate within 1 minutes if you take the time to set it up correctly.

I just found one today. Im interested in finding out more regarding home to properly use it and figure out latitude