According to Wikipedia, the fastest roller coaster in the world is called Formula Rossa. It’s in Ferrari World, Abu Dhabi, and it reaches a speed of 240km/hour. 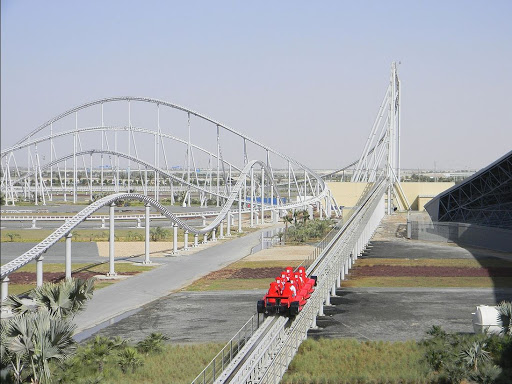 Definitely too frightening a ride for me. There’s speculation and some research suggesting that the DRD4 gene, which has an effect on dopamine receptors, influences thrill-seeking behaviours. It seems clear to me that I don’t have that gene.

But there’s a faster ride than Formula Rossa, right here in Toronto. More than four times as fast. This one travels in a circle, at a speed of over 1,100 km/hour. Unlike the Formula Rossa, this ride has no height restrictions, doesn’t require a seat belt and is free. And we’re not afraid of this one. In fact we’re all already on it. As you may have guessed: we're all rotating at that speed around the axis of the earth. At the equator they're going even faster. Their speed is over 1,650 km/hour.

So the question is: why does a piddly speed of 240 km/hour scare the heck out of me, while I don’t even notice a speed of millions of km/hour. The answer – thank you Professor Einstein – is that speed is relative. I can’t actually tell if I’m whizzing around at a million km/hour, or if I’m sitting still and the universe is whizzing around me.

What does make a difference is acceleration. I can tell – thank you Professor Newton – when a force is acting on me and changing my velocity.So when the back of my seat on Formula Rosso punches me in the back and accelerates me from 0 to 240 km/hour in under 5 seconds, I know all about it.

And that’s why I won’t set foot on Formula Rosso!
Posted by Simon Shapiro at 9:00 am