When the Diatom Forest Turns into 'Cafe Crema'

[Ever wonder what makes foam on the surface of streams you know aren't polluted? You'll learn all about this natural foam, in today's post by Nina Munteanu]

On a late July morning, I was on my daily walk along the Otonabee River in the Kawarthas when I noticed a yellow-brown creamy film on the water lapping onshore. In some places it looked like left over dishwater, but in others, it resembled cream. The multi-hued film swirled like flowing paint in an Emma Lindstrom artwork. It was the “eddy shedding” patterns of Saturn’s north polar atmosphere or Jupiter’s Great Red Spot. 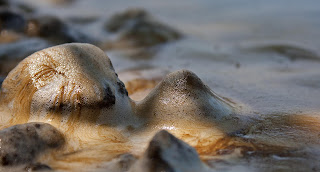 Otherworldly. But it didn’t end there…

Later in the day, the froth turned into a mocha-coloured micro-foam that resembled the crema of a well-made espresso. Entrained by the wind that conspired with the river’s current, the film grew into caramel ropes that covered the rocks on shore in stripy shades of delicious earthy mocha cream—a synesthete’s dream. 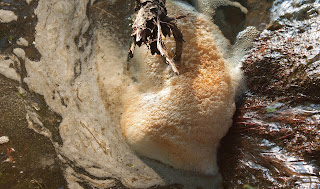 At the mouth of one little tributary to the river, foam with hints of caramel rose in a cloud of froth where the runoff tumbled into the Otonabee River.

My first thought was crushed diatoms. Diatoms are often the main component of periphyton (attached algae) the dominant micro-community in a riverine ecosystem that provide an important food source and home to a diversity of other life.

Diatoms are single-celled algae enclosed in shells made of nanopatterned silica and organic compounds called frustules. The glass frustules are hard but porous and etched in decorative markings or bands (rows of pores or alveoli to form striae and interstriae) that are used in identifying the more than 20,000 species. The silica shell protects the diatom from predators and acts as a ballast; the pores give the diatom access to the external environment for things like nutrient uptake, waste removal, and mucilage secretion so the diatom can attach itself to a substrate. 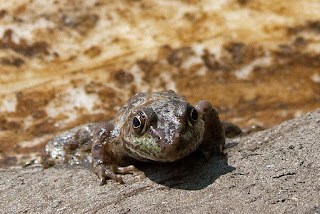 When subjected to great turbulence—such as when the dams along the river suddenly open—the diatoms, along with the fatty acids of associated decaying organic matter, create a ‘soap’ as their glass shells break apart and release lipids and proteins that act as foaming agents or surfactants. Air bubbles are pulled in through the turbulence to produce foam. Because the organic surfactants lower the surface tension of water, the bubbles persist at the water’s surface. The bubbles accumulate hydrophobic substances and the dissolved organic matter stabilizes them and aggregates them as nutrient-dense foam. Like I said: café crema. This metaphor isn’t farfetched: in fact, crema—the most prized aspect of a well-made espresso—is created through a similar process when hot water emulsifies coffee bean oils and floats atop the espresso with smooth little bubbles. 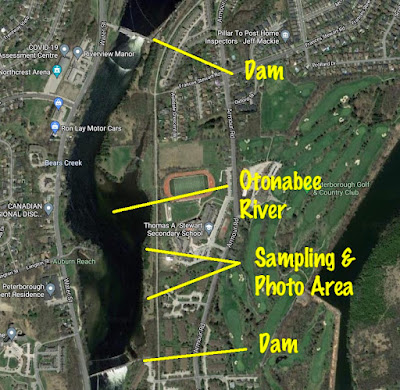 Given that the Otonabee River is regulated by several hydro-generating dams and locks to control its flow and provide electricity, it’s not surprising that many of the diatoms in the foam are periphyton that have sloughed off a submerged surface in the sudden turbulence caused by the dam release. You’ve seen periphyton; the slippery brownish, oily-looking felt mats that cover the cobbles and rocks of streams and rivers. Sometimes, they grow bright greenish ‘hair’, most likely one of the three most common filamentous green algae (Spirogyra, Zygnema, and Mougeotia), all of which I’d already observed growing on the river banks in the spring. 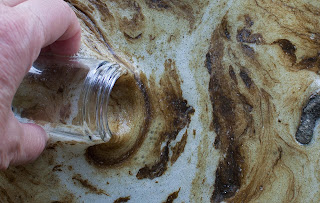 Excited to see if I was right in my initial assessment, I returned with a small glass jar and sampled some of the tan-brown scum-froth then returned home to the microscope. And I confirmed that most of the scum was a combination of:

Diatoms adhere to submerged surfaces through mucilage produced between the frustule (the diatom’s outer shell) and its substrate. The form of the mucilage varies and includes gelatinous stalks, pads and tubes. For instance, Cymbella and Gomphonema produce long stalks that attach directly to the surface, allowing them to form a swaying canopy over the lower tier of cells such as Fragilaria vaucheriae, Synedra radians and Cocconeis placentula (think overstory and understory of a terrestrial forest or a marine kelp forest).

As part of the understory layer, diatoms such as Fragilaria vaucheriae and Synedra radians attach to the surface at one end (apical) of their rod-shaped frustules using a mucilaginous pad to form “rosettes” that resemble spiky understory shrubs.

Just like trees, the canopy-forming stalked diatoms effectively compete for available light and nutrients in the water with their vertical reach. They provide the ‘overstory’ of the diatom forest’s vertical stratification. These tree-like diatoms also provide an additional surface for other diatoms to colonize (e.g. tinyAchnanthes settle on the long stalks of Cymbella, just as lichen does on a tree trunk).

The stalked diatom forest acts like a net, trapping drifting-in euplankton, such as Pediastrum sp. and Fragilaria spp., which then decide to stay and settle in with the periphyton community. The mucilage captures and binds detrital particles in both lower and upper stories of the diatom forest; these, in turn, provide nutrients for the diatom forest and additional surfaces for colonization. In their work with periphyton communities, Roemer et al. (1984) found several diatoms (e.g. Diatoma vulgare, Fragilaria spp. Stephanodiscus minutula) entangled in the complex network of cells, stalks, and detritus of the diatom forest’s upper story. They also found rosettes of Synedra radians—like jungle orchids—attached to large clumps of sediment caught by the net of mucilage.

Eventually, ‘overgrowth’ occurs as the periphyton colony matures and grows ‘top-heavy’ with all this networking. The upper story of the community simply sloughs off—usually triggered by turbulence such as when the dams release water. This is similar to a forest fire in the Boreal forest, which creates space and light for new colonization and growth. The dislodged periphyton then ride the turbulent flow, temporarily becoming plankton, and those that survive the crashing waters provide “seed” to colonize substrates downstream. 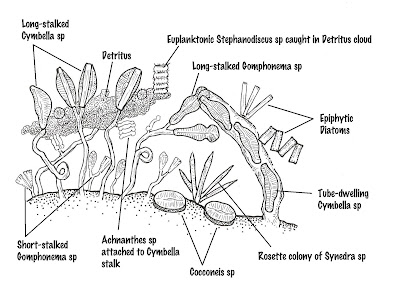 Amid the many dead frustules, I observed many living diatoms along with green and blue-green algae, rotifers, Protista and bacteria feeding on the detritus. I even saw one amoeba, actively feeding on the nutrient-rich interface of a micro-foam organic bubble.

The dams on the Otonabee River dramatically affect its aquatic biota by altering hydrology, sediment transport, nutrient cycling, temperature regimes, and the movement of organisms. One of the main impacts of a dam is the change in flow dynamics: intensity, velocity, direction. By their very nature, dams create more lake-like environments (lentic) from a more river-like one (lotic). This forces aquatic communities to adapt from free-flowing, erosional habitats to depositional environments.

Having a less mobile substrate along with increased temperatures and higher nutrients in river sections behind dams will lead to increased biomass of certain diatoms and the proliferation of filamentous green algae (e.g. Ceratophylum, Spirogyra, Zygnema, and Mougeotia—all currently blooming in the Otonabee River along with the diatom forests. All are responsible for taste and odor of the water.

Taste and Odour of the Diatom Forest

In addition to providing hydroelectric power, the Otonabee River is a source of drinking water for the City of Peterborough. Particularly in the warm summer months, Peterborough residents notice that their tap water carries a complex taste and odor with hints of mostly earthy mustiness. This is caused by several volatile organic compounds (VOCs) created and released by benthic algae as secondary metabolites associated with growth and reproduction or in response to age, death or environmental stresses. While not harmful, the T&O compounds are detectable even at extremely small concentrations (e.g. parts per trillion).

The diatom forest provides potentially significant sources of biogenic taste and odor VOCs in a river. When diatoms slough off the top-heavy forest and their frustules break apart—particularly during a diatom crash through some disruptive event (e.g. predation, disease, temperature, photolytic stress, dehydration, chemical treatment, or destructive turbulence such as a storm, dam release, etc.)—the diatoms release oxylipins and polyunsaturated fatty acid (PUFA) derivatives, among other things. Oxylipins carry a fishy, rancid, oily or cucumber odor, caused by unsaturated and polyunsaturated aldehydes (PUAs) and other alkenes derived from the fatty acids. They can also cause a ‘grassy-fruity-floral’ odor. The hydrocarbons, amines, terpenes and sulfides released by the degrading diatom mass may smell like solvent, fuel oil or gasoline, acrid burnt fat, and old tobacco.

Diatom species implicated in these odors include Fragilaria, Synedra, Melosira, and Stephanodiscus among others—all identified in the scum I looked at.

Diatoms use volatile taste and odor compounds to modify cell function (e.g. as antioxidants, pheromones, and autoregulation) and food web interactions (grazer deterrents, inhibitors, toxins against predators, attractants) and in response to stress.

Although the production and release of volatile taste and odor compounds is natural to many river algae (in the process of cell metabolism, growth and eventual death and decay), environmental stresses can escalate and intensify the release of T&O compounds. Organic enrichment and nutrient enrichment of the river from fertilizers and urban runoff create stress by overly increasing the biomass of river algae, leading to blooms and bloom crashes with higher incidence of T&O.

Smolar-Zvanut, Natasa and Matjaz Mikos. “The impact of flow regulation by hydropower dams on the periphyton community in the Soca River, Slovenia. Hydrological Sciences Journal 59 (5): 1032-1045.

Posted by Paula Johanson at 8:04 pm