Dog Vomit Slime. Pretzel Slime. Wolf’s Milk Slime. Insect Egg Slime. These are just a few of the wacky names people have come up with to describe different species of myxomycetes, a group of peculiar miniature “critters” commonly known as slime molds.

Slime molds make me happy – and not just because of their wacky names. They make me happy because almost everything about them is odd. One of their oddities is that they spend part of their lives behaving like animals and another part acting like plants or fungi.

To see slime molds, it helps to get down on your knees in the woods, especially beside rotting logs in places were it’s damp and dimly lit. This is where many types of slime mold begin their lives as a loose sack of liquid, a huge single-cell with multiple nuclei. In this slimy form, called a “plasmodium,” the organism oozes slowly over and under dead leaves like a mammoth amoeba, speeding along at about a millimeter an hour. While it moves it feeds by engulfing and digesting bacteria, fungal spores, and even other slime molds. What’s really impressive is that this network of slippery muck behaves as if it has intelligence. It makes choices, veering towards food as if it’s hunting. In the lab, some slime molds are even able to figure out the shortest path to escape a maze. Stranger still, if the plasmodium is chopped into bits, the separated pieces will slowly migrate back together again!

When food runs out, or the environment becomes too dry, slime molds search out a high spot, such as a log, to do their plant-like trick of sprouting fruiting bodies and releasing spores. This is the stage where they get fancy. The giant plasmodial cell divides itself into innumerable single cells that then form the fruiting bodies. In many species, some of these cells seem to sacrifice themselves for the good of the others by creating a stalk that will hold the spore-producing structures high enough to catch a breeze. When mature, the structure bursts open and the powdery spores are carried away by wind or passing animals. 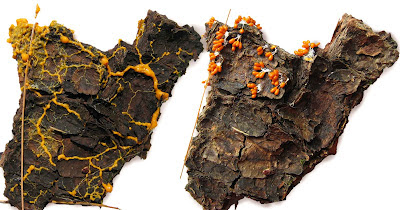 More than 1,000 different slime molds have been identified, and they come in a startling variety of shapes and colors. Some look like mini wieners-on-a-stick or ice-cream cones or pretzels, though at a size only a cricket could enjoy. Others have shimmering, metallic coats, or are encased in a cracked white crust. Yet others look like delicate coral. One of my favorites, Wolf’s Milk Slime, will squirt pink goo at you if you poke it with a stick. There’s even one that can grow so large, and is so ugly, that some people blame their neighbor’s dog for its appearance in their garden or on their woodpile. That one’s scientific name is Fuligo septica, otherwise known as – you guessed it – Dog Vomit Slime. 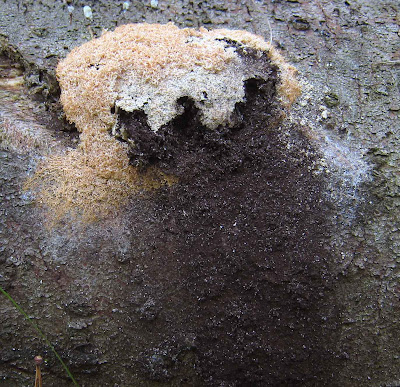 Posted by Jan Thornhill at 5:51 pm

Awesome photos! slime molds are so alien... and very beautiful.